Warning: Declaration of ET_Theme_Builder_Woocommerce_Product_Variable_Placeholder::get_available_variations() should be compatible with WC_Product_Variable::get_available_variations($return = 'array') in /home/customer/www/ticketrescue.com/public_html/wp-content/themes/Divi/includes/builder/frontend-builder/theme-builder/WoocommerceProductVariablePlaceholder.php on line 0
 Songs to Steal Karaoke - Ticket Rescue 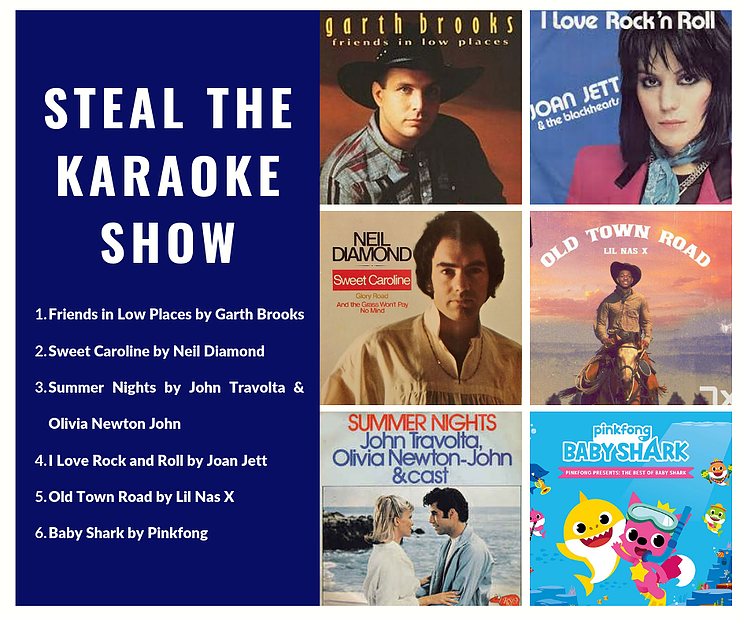 No matter how poor of singer you may be, it is hard to deny that almost everybody loves to sing along with their favorite artists.

Whether it is crooning along to the radio on your way to work or putting on a private concert in the shower for yourself, it always feels good to belt it out and let some energy go.

It’s all fun and games when you’re performing alone, but what happens when you get called up to the big leagues, karaoke?

All of that confidence you have alone can go out the window when you’re asked to perform in front of friends and strangers, but that’s alright- and also why we all still have day jobs.

Karaoke is all about having fun and getting the rest of the crowd into it, and whether you have a decent voice or are completely tone deaf, we’re here to restore some confidence by providing you with some fail-proof options to be the life of the next karaoke party.

Now not everyone may be a country fan, but that’s true for any genre really. You might not want to kick the night off with this one, let the room get warmed up a little bit, but once it is watch this song work its magic by getting everybody involved in the chorus. Brooks’ low notes might be a little harder for females to reach but for the guys without much of a singing voice it proves easy to grumble deeply along. What better song to sing for your friends than letting them know you always have them around in low places.

This is another song on our list that you can hide behind the crowd if you aren’t feeling like being the spotlight of the show. “Sweet Caroline” has been a staple in stadiums like Fenway Park and Beaver Stadium for years because of its ability to get the entire crowd to join together in harmony. The verses are song softly enough that you don’t need to do anything fancy when you’re on your own and as the hook hits, so does the crowd joining in. This a good song to start off early in the night and to get your friends involved to get the energy going.

This one may seem like it is a little tricky, and while vocally it may be, there is enough “fluff” and theatrics to it to keep the attention off of you. For starters, this is a duet so you’ll need to grab a partner so you don’t have to take on the stage alone (A great excuse to talk to that special someone that you have been eying all night.) Once again since it is a duet you only have to do half the work and a nice call and response section takes away some heat and allows the crowd to get involved again. Plus, although this may be more difficult to hit the actual notes, you can always look for a few good laughs by swapping the male and female roles between your partner.

#4: I Love Rock and Roll by Joan Jett

Another staple among karaoke machines, this is a great choice because it takes more attitude than it does actual singing ability: it requires grit, and attitude, and energy… and not much range. Jett’s a legend, and this is one of those songs that no one hates; it’s an easy choice, and has a powerful, sing-along chorus. This upbeat choice is sure to get the hand banging and singing spread all across the bar.

We are going to wrap up our list with some more recent songs that have broken through, but still almost everybody has heard and knows by now. The first being “Old Town Road”, a modern masterpiece that blends together a little bit of every genre but mostly the opposing rap and country genres. What better song to pick to bring a room full of uncomfortable people together than a song that brings together such polar opposite genres. The song provides fun lyrics to get the crowd laughing and a chorus that you can sing at the top of your lungs and still get drowned out from the crowd.

Our last addition is most certainly a controversial one, and one that we recommend gaging the crowd before requesting. This is more of an option if you absolutely hate to sing in front of people and aren’t very comfortable trying something more serious. This song has proven to be viral favorite amongst toddlers, so most parents are familiar with the song and would probably get a kick out of seeing an adult wander on stage to perform it. Besides, the only words you really need to know are baby shark and a couple of “do-do-dos’”.

You have Successfully Subscribed!